A Wander Around St. Ives 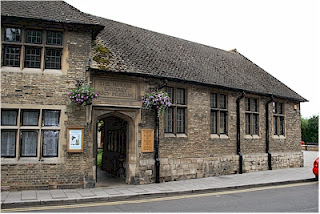 This morning Josph12 and I headed into St. Ives to have our ears lowered. We parked up at Waitrose and headed over towards Bridge Street picking up random clues for Slepewalk on the way.

Also on the way is Good for What Ales You – St. Ives, UK. which we grabbed without realising that a clue to the multi was nearby.

So, ears lowered it was off to grab Norris Moorings, hidden in 2004, before heading to the main event … The Hursting Stone. This cache is situated within the Norris Museum.

The museum has a nice garden which houses The Hursting Stone (google it) and the cache is actually inside the museum, so is not available 24/7. Well worth a visit.

Now it was time to finish off the multi. So, with all the clues in hand, we now had to drive back to somewhere that we had only recently left. J12 was sent in to retrieve and as we were dealing with the log a chap walked past that we hadn’t spotted – Ooops! It didn’t look like he cared what we were doing.

Having done with all these old caches in St. Ives we headed home the long way round and grabbed Under Powered. Having seen a you tube video of something similar I was prepared for what I would find, I was not wrong! reading previous logs is hilarious – a must do if you know where the cache is!