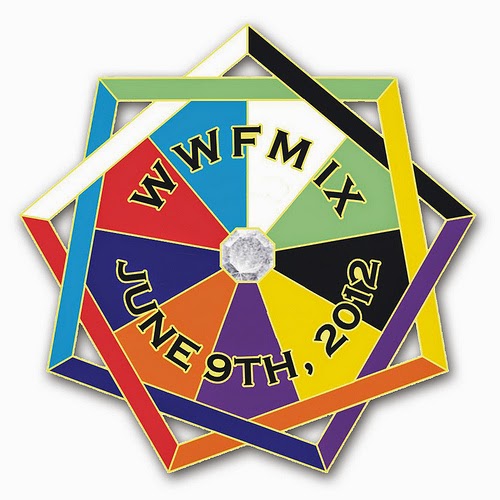 Today was the day of the Pirates Flash Mob in Peterborough and my own personal challenge to find 8 different cache type in 1 day. It would have been 9 but the webcam cache over in Northampton was apparently not working.

Last night, with the wife muggle away with most of the geobrats I worked out a plan of action which involved an early morning dash over to Northamptonshire for an Earthcache, Letterbox and Whereigo followed by a trip over to Somersham for the Prime Meridian virtual and then just filling in the multi and trad wherever possible before grabbing 1 of several previously solved mystery caches on the way to the event.

So, on a cool and misty June morning J12 and I hopped aboard the cachewagon and headed to grab some breakfast at the golden arches before heading along the A14 into Northamptonshire.

1 – Earthcache
1. Before long we were approaching Waldgrave and our first stop, Red Springs – Chalybeate Earthcache. I parked up opposite the pocked park and as we got out a woman approached us. I askd if it was OK to park here (as I assumed she was coming over to moan) and she said as far as I know and carried on walking.

So we headed into the park and were soon at GZ although it was not immediately obvious how to get there. Once there we estimated the answers to some of the questions and took a photo before heading back to the motor. One down.

2 – Letterbox
From the earthcache we relocated into the village itself and headed over to grab the Ten Years! Waldgrave Letterbox. I began by trusting the google satellite image on the phone for this one whereas I should have trusted my caching senses and gone for the obvious.

We were about to give up when a couple approached who had been petting the horses and asked if we’d lost anything. I explained that we were partaking in a type of orienteering scavenger hunt and they said – is that geo-something-or-other?

Yes! It turns out that they’d recently been visiting friends in Yorkshire who geocache!

I showed them the satellite image on my phone and explained what it told me; then I said if I hid it it would be here … and it would look … just like this!!! As the cache appeared in my hand!!!

Very nice, my logbook was soon stamped and the cache logbook annotated in an appropriate manner.

Whereigo – Attempt 1
Close by to the letterbox was the whereigo WhereItAllStarted a potted history of geocaching. We started it and realised we really should have started this when we did the letterbox as it took us roughly in the same initial direction

We got around the walk only to ignore the warning at the penultimate stage, got to GZ and then have to go running back round because, as total nubs, we didn’t pick things up on the way round so practically had to start all over again when we were almost at GZ – Ooops!

By now J12 was moaning and suffering from hayfever and then the phone died just as we were returning to the final!!

We had a good look around GZ anyway (and judging by the cachers trail and previous logs) we were in the right place but, as this was our first whereigo, we were unsure whether there was a physical cache at the end of the trail or not and if we’d need to upload a completed cartridge (no longer possible!) as proof.

So we gave up before wasting too much time and retreated to the car but the car charger was not going to get any significant amount of charge into the phone in a reasonable amount of time!

So, with a dead phone it was time to head home, wifey muggle was going to be home soon anyway, so that was a good idea.

At home, I set the phone on charge and went about looking into other whereigos. Luckily there is another one close by to the virtual. What I also didn’t realise at the time was that there was a mystery, multi and traditional all close to Waldgrave. There was also mention of events in some of the logs. I reckon someone set up the area to enable exactly what I was doing!

3 – Traditional
The wife muggle soon arrived home and I then popped out to grab a traditional by TheVolt.

4 – Multi-cache
After lunch I persuaded wifey muggle to let me out with the older geo-brats to venture Somersham way for the whereigo adventure, but first a multi-cache by mummymel. Whilst out earlier to grab the traditional I had done stage 1 of this, so it was just a question of picking this up.

Pick it up the kids did, and then threw it away. I soon realised their mistake though and showed them that it was the cache!!

5 – Virtual
From the old church we headed off along the foot path to find the prime meridian for Quintuples on the Meridian. Here we took the required photograph of the GPSr phone which religiously refused to give us all 0s in both axis at the same time! By now J12s hayfever had yet again gone project-ape so we headed straight down the tractor tracks to the car!

6 – Whereigo
Once we had got back to the car and relocated to Needingworth we started the whereigo adventure. We cheated a little by driving round most of it! On the way round we found the Needingworth Lock up cache that had been lost, it was just sat in the grass near GZ. So I signed the log and returned it to where it was supposed to be and later advised the CO it was OK.

Near the end we stopped off at the local pub for a bit of refreshment as it was getting a little warm and then headed off to finish the cartridge.

7 – Event
On the way to the event we tried to find @ which I had solved some time ago but it had been missing. This time we failed again and had to leave or we’d miss the flash mob. Cutting it fine we pulled into the cathedral car park and headed over to the lido without buying a ticket and arrived with seconds to spare for WWFM IX:Flashing in the Lido which had been moved from the city centre at the last minute. I think the lido made a more suitable location anyway!

Here we met Beech Hut Sara who it turned out was another ex-employee of the company I work for but had been made redundant and her partner Barry. Barry confirmed we were on the right track with the @ cache so I determined to re-check that on the way home rather than go for 1 of the back up mystery caches I had up my sleeve.

We met many people who were much better dressed as pirates than my paper hat that 2 year old Bobas had made me!! As we had to go out later we had to leave and grab the mystery on the way home.

8 – Mystery
After the event we just had enough time to have another look for this and this time the kids found it easily, a little way from where the coordinates were pointing. It was the second of it’s type we had found today, and luckily they didn’t throw this one away!

So there we have it, 8 different types of geocache in one day!