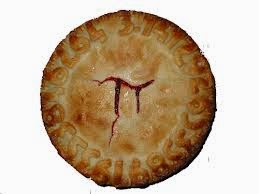 International Pi day (if you write your dates in Yanky-Doodle-Dandy fashion) started at 9:26 yesterday morning.

As I am English and write my dates the proper/logical way round I will be celebrating Pi day on 22/7 – so there.

The main reason for that is because I couldn’t make it to an event on Pi day so I couldn’t get that souvenir. I was traveling from Huntingdon to Nottingham on that day. The Peterborough event was at 5pm and the Nottingham event was in the morning. Hrrrmph!

I could however grab a puzzle cache in Nottingham that I solved 2 years ago, so at least I’d get one souvenir 🙂

Speaking of puzzles I have my own Pie based puzzle that only has 1 visit registered on Pi Day so far.

Anyway, as we were driving up I was trying to log into c:geo but no joy. It seemed that geocaching.com had gone down – even worse it was 11am in England so it was about 3am in geocachinghqland so what were the odds of a quick fix? Pretty long!

Throughout the course of the day I could grab a connection here and there, enough to get some CMs downloaded onto my phone along with the puzzle.

As you may know, I like getting puzzles as my 100 milestone caches (2000 was obviously the exception) and I was on 2393 finds and wanting to get this puzzle in Nottingham on Pi day. I also want to grab some Nottswalker caches.

So the plan was hatched to grab 6 Church Micros in Nottingham, including at least one of Nottswalkers and then grab the puzzle as 2400.

The preparations were in place and then it was just a question of waiting for the muggle-wife to get back from shopping with her parents and the big geo-brats to look after the geo-tots. That didn’t happen until 17:00 so it was now race against time to grab all 7 in an hour before it started getting dark and I had to get back to get ready for out wedding anniversary meal!

Luckily all went swimmingly and all 6 finds were nice and easy, except one which took a couple of minutes to find, one that was 200 yards up a closed road and the puzzle GZ which had some decoys!

When we got home today I went to look some things up on project-gc and it looks like their API has temporarily been shut down due to the reported massive outage at gc.com due to Pi day!